Before we get into it, I want to apologize upfront to the Hall of Famers mentioned in this KatzTale. They’re great men. I enjoyed our time together. They worked real hard and their promotions were huge successes.

But let’s face it: World-class athletes can do one thing better than the rest of us. And that’s often pretty much it.

In September 1982, I was paged to Mort Zieve’s office. The chairman of Simons Michelson Zieve, in a northern suburb of Detroit, was always calm, even during the daily crises that typify an advertising agency. Still, his tone was urgent.

“Jon, how fast can you get to the Pontiac Silverdome with a soundman and a tape recorder? Magic Johnson has agreed to cut a radio commercial for Big Boy, and he’s up there now visiting. Oh yes—how fast can you write the commercial?”

Earvin “Magic” Johnson had won two NBA championships in his first three seasons with the L.A. Lakers. In Michigan, however, the Lansing native was already a legend, having led his high school to a state title, and Michigan State to a victory in the 1979 NCAA championship game against Indiana State and Larry Bird.

I dashed out some unremarkable copy and met a local audio engineer at the Silverdome. We set up in a private suite high above the court, on which the Pistons were taking pre-season practice.

Minutes later, the mega-popular 6’9” point guard came in, flashing a smile that was now famous throughout the world.

The smile faded when he sat down and looked at the script. Reading copy proved harder for Magic than defending against Bird.

After several false starts, I changed some phrases to make the sentences smoother, broke his part into two shorter sections instead of one large one, and put on my audio coach’s cap to boost the big man’s confidence.

Here’s how it turned out:

Suffice it to say, Magic Johnson progressed from there like the champion he is. His personal and professional accomplishments would fill pages stacked up as tall as him. As for his skills behind the microphone, he became an NBA commentator for seven years and is still a much sought-after motivational speaker. He is currently president of basketball operations for the Lakers.

And as for that smile, he hasn’t lost a step.

The following year, client Hiram Walker—makers of Canadian Club—charged us with following up the huge success of the 1982 Holiday Sales Film we produced for them, which featured Gunther Gebel-Williams and the Ringling Bros. and Barnum & Bailey Circus.

We decided to use a sports personality to help showcase the products and promotions for Hiram Walker’s important holiday gift-giving season. The film would be shown in sales meetings nationwide. 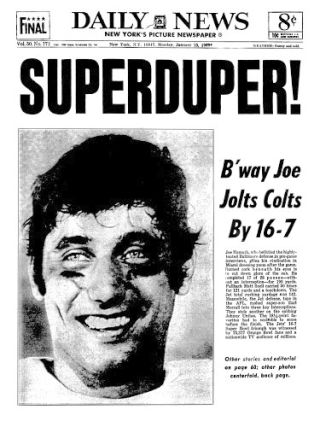 “Broadway Joe” parlayed his football career into movie, stage and TV appearances. He made biker film “C.C. & Co.” in 1970 with Ann-Margret. He did summer stock in “Damn Yankees” (as Shoeless Joe Hardy), and even a stint on Broadway in “The Caine Mutiny Court-Martial.” Most of his small screen roles were as himself, in shows like “The Brady Bunch,” “Here’s Lucy” and “Alf.”

It was obvious that he was much better playing Broadway Joe than Shoeless Joe. Nonetheless, musical comedy was his passion when he signed on with us, and that suited me just fine. With my background in theatre and copywriter Eric Head’s comedy genius, we wrote a 30-minute musical sales film, with Hiram Walker-ized lyrics to familiar show tunes.

We sent him the script and demo tracks to the songs. In early May, two weeks before shooting, our creative team flew to Philadelphia, where Joe was appearing in “The Rainmaker” at the City Line Dinner Theatre. After the show, we met him in the dressing room. He was accompanied by prominent L.A. vocal coach Arthur Joseph.

The plan was to have Joe run through the songs. But that wasn’t his plan. He wouldn’t sing; not a note. The hero of Super Bowl III, the man who dated Raquel Welch, the guy who wore pantyhose in a TV commercial, was afraid to sing for us.

In a 1981 New York Times interview, Namath explained his hesitancy.

“For me, the singing is the hardest part. Singing takes a lot of concentration and sometimes my concentration gets broken. To compare my theatrical career with my football career, as an actor I’m like I was as a high school football player. Or even before that in some phases.”

So what could we do? We said, “See you in Detroit,” and hoped for the best.

Jim Michelson, who was more in tune with Hiram Walker’s nationwide network of liquor salesguys, said, “Don’t worry—he’s Joe Namath. They’ll love whatever he does.”

He sounded like Joe making that Superbowl guarantee. I wouldn’t have put a bet on it.

We shot for a week at Detroit’s Music Hall, with Joe supported by a front line of eight dancers. We scripted terrific bits with Joe in a tuxedo, in a bathing suit, in a sailor’s outfit, and in top hat, white tie and tails.

He was still hesitant, and needed lots of coaching. Eric worked with him on the copy punchlines, while I led him through the musical lyrics. He was hopeless in the dance numbers, but Jim Michelson’s reassurance kept surfacing: “Don’t worry—he’s Joe Namath.” 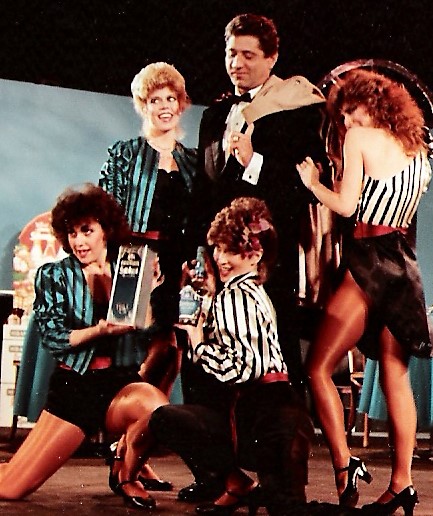 During a lunch break, I accompanied Joe in the limousine we provided him for his stay. He said, “Jon, do you wanna see why I have trouble moving on stage?” He lifted his pants legs, and pointed to the surgical scars on his right knee and the lump behind his left thigh.

He once told The New York Times, “You have three muscles in your hamstring area and I tore two of them. That’s why the lump is there. I couldn’t run from here to there. I still can’t. I can jog but I can’t run.”

When the holiday sales season came around in the fall, I attended several meetings. These hard-boiled salesguys rarely react to anything other than the free food. When the lights came back on after screening our film, they were standing. I should have known.

I’ve found that the more professional performers are, the nicer they are off the field or the stage. This is no truer than with the right fielder for the Detroit Tigers from 1953-74, Baseball Hall of Famer Al Kaline.

His career highlights are long and justified: A 10-time Golden Glove winner, voted to 18 All-Star games, the youngest player (at age 20) to win the American League batting title, and owner of a host of Tiger career records that still stand.

In 1975, Al joined fellow Tiger legend (and Hall of Fame infielder) George Kell in the TV broadcast booth. And in 1985, he and George teamed up for something that proved even more challenging for Al than facing Bob Gibson three times in the 1968 World Series (which the Tigers won in seven games).

Our client was Metro 25 Car Care Centers, a nationwide buying group of over 400 mom-and-pop tire stores, the largest in the country. It was founded by a dynamic entrepreneur named Duane Rao, a former University of Michigan quarterback.

Duane engaged George and Al as on-camera co-hosts for the 1985 Metro 25 Sales Video, a taped recap of the year’s accomplishments and preview of upcoming plans. I wrote the script, which was delivered ahead of time to each of them. Their parts would be put on a TelePrompTer for the three-camera shoot.

It was—how do I say this nicely—a rough production. And not totally their fault.

Put them in the booth and you could count on enjoying George’s folksy play-by-play coupled with Al’s inciteful, low-key color commentary.

Put them in front of a camera with scripted promotional copy and technical gibberish rolling quickly past the lens, however, and it was a brand-new ballgame.

Clearly, we asked too much of them. We should have used an off-camera announcer to handle the longer passages. Instead, the entire show was on their shoulders.

Al, particularly, had trouble at the plate. One section had him talking about the advertising agency—Simons, Michelson, Zieve. Here are some outtakes that have never been seen publicly:

When lunchtime thankfully came around, Al took me aside to a quiet corner of the studio. He looked like he’d fanned four times in an exhibition game.

“I’m sorry, Jon. I probably cost you guys a lot of money on those retakes,” he said. “But there’s something you need to understand.

“I wasn’t a very good student in high school back in Baltimore. See, I sat by the window. And just down below was the baseball field. I spent most of the time looking out that window at that baseball field, dreaming about one day being a major leaguer. The teachers passed me because they thought I’d make it. So I guess things like reading took a back seat.”

Well how do you answer that? Al went right out of high school to the Detroit Tigers. He never played a day of minor league ball.

Today, “Mr. Tiger” has been with the team for 66 years, on and off the field, and serves as special assistant to the general manager.

And let me add two notes.

On May 28, 1962, the Tigers visited the New York Yankees. Al made a game-winning catch in the bottom of the ninth inning, breaking his collarbone. I was there. He flinched when I told him.

And let it be known that soon after our taping, Simons Michelson Zieve changed its official name to SMZ Advertising.

So Al, you weren’t the only one who whiffed at the high, hard ones.