By 1982, I was touting myself as the most prolific broadcast writer in the country. I had written over 10,000 radio commercials just in my time at Byer & Bowman in Columbus, Ohio, from 1974-1979. It was a pretty insane place—even for an advertising agency.

Take our client in St. Louis, Famous-Barr department stores. I wrote about anything you could buy there. Like mattresses. Famous had ‘em all: Simmons, Serta, Stearns & Foster, Sealy. If a sale was Thursday through Sunday, I had to write a new spot for each day:

That last one never made it to the air, but I bet they thought about it.

And that was just one store. The B&B Retail Division, where I was senior writer/producer, also cranked out radio and TV for similarly sized stores in Indianapolis (L.S. Ayres), Minneapolis (Donaldson’s), Columbus (Lazarus), Washington (Hecht’s), Florida (Robinson’s), Rochester, NY (Sibley’s) and Denver (May Co.). 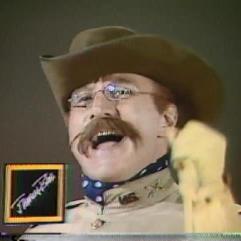 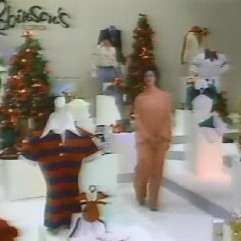 Three of our retail commercials for Famous-Barr, L.S. Ayres and Robinson’s.

If you’re from one of those cities, your hankie must be out by now, because not one of these stores exists today, merged into Macy’s and other corporate giants. But back then? It was a pressure-packed and exciting time.

Ultimately, though, how much can you say about a mattress? Or a leisure suit, CB radio or mood ring? This was the 70s, remember, and I plugged ‘em all.

I was hired by Simons Michelson Zieve Advertising in the Detroit area in April, 1979, as its Creative Director. That title lasted less than a week. I had no experience in print, and no qualifications to judge anyone else’s work but my own.

So wisely, agency Chairman Morton Zieve and President Jim Michelson named me Broadcast Production Supervisor. It would be twenty years before I got comfortable writing anything that didn’t get made on tape.

Mort and Jim ran their shop quite differently than did my previous employers. Good work was appreciated and good humor was embraced. In Columbus, the bosses never invited me to dinner at their homes or to play tennis, or came to my performances in community theatre. Mort took the entire office to see me as Motel the Tailor in Fiddler on the Roof.

One day in January, 1982, I was paged to come to Jim’s office. The agency president was just hanging up the phone when I sat down. “That was our client over at Hiram Walker,” he said.

The huge distiller, directly across the Detroit River in Windsor, Ontario, Canada, was one of the agency’s earliest clients, dating back decades, but SMZ only created print ads, still not my thing at all. Besides, I didn’t even drink (still don’t).

Jim continued. “They want to know if we’d be interested in making a 30-minute video presentation to show the products and point-of-sale displays for the holiday season. It’s shown in the fall around the country at meetings for distributors who sell to bars, restaurants and liquor stores.”

A 30-minute video? I’d never written anything more than 60 seconds. But it sounded great … until Jim explained how they wanted us to do it.

“The president of HW likes circuses. He wants to know, can we do something with a circus?”

Oh yeah, right. Using a circus for a liquor sales video. And who would narrate it, Kermit the Frog?

So the next day, using phone skills admittedly far beyond my own, Jim called down to Sarasota, Florida and somehow reached Irvin Feld, president of the Ringling Brothers and Barnum & Bailey Circus—The Greatest Show on Earth.

Feld was an old-school impresario, a music promotor credited with discovering Paul Anka, and who helped put together early rock tours for The Beatles and Motown. He bought the Circus in 1967 for $8 million, and sold it to Mattel in 1971 for $50 million in stock. Two months after our first conversation, he would re-acquire the company for $22.8 million, including the Ice Follies, Holiday on Ice and the new Walt Disney’s World on Ice.

On the phone, Mr. Feld agreed that it was an unlikely alliance. Protective of maintaining the Circus’ family image, liquor seemed the last product he’d want to get in bed with—so to speak.

After further discussion, and being assured by us that the video would be for internal use only, never to be seen by children, he had an idea.

“Y’know, you don’t want the whole circus; you want Gunther Gebel-Williams—our great animal trainer. You can show the care and preparation that Gunther puts into his acts to demonstrate the same qualities that Hiram Walker puts into its brands.” 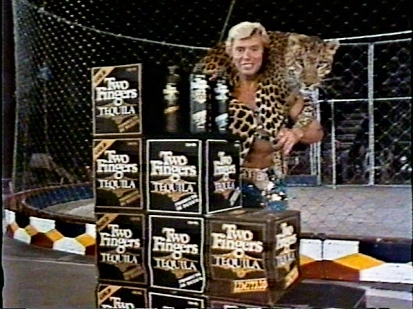 Gunther Gebel-Williams’ signature pose, and how he adapted it for our Hiram Walker 1982 Sales Film. The leopard behaved—he only ate two cameramen.

Jim and I nodded. It was just the right approach.

“Why don’t you two come down and discuss it in person with me and my son Ken?”

Ken Feld. The name was familiar, but I couldn’t place it. I had heard it a long time before, but not in relation to the circus. A few days later I remembered the connection, and we flew to the winter headquarters of the world-famous spectacle that I had seen so many times at Madison Square Garden growing up in New York. 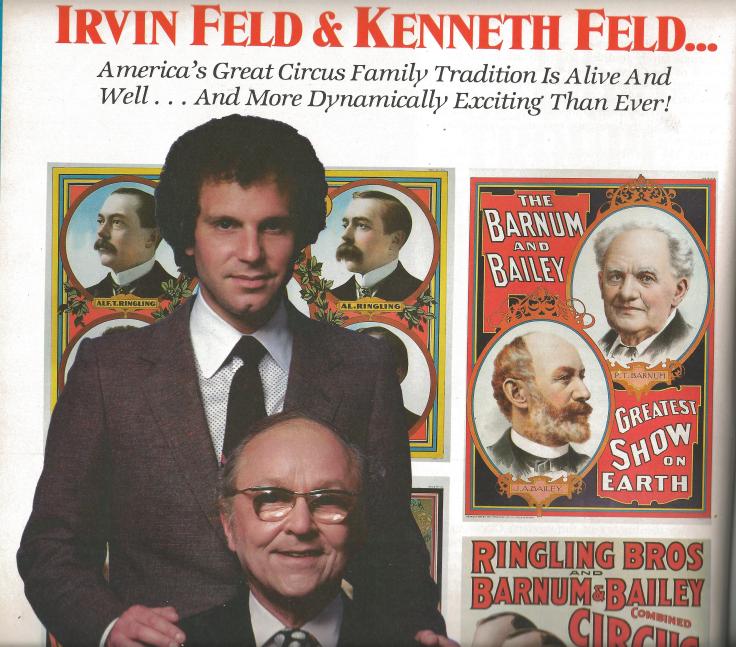 But there was a hitch. I’m a horrible flyer. People say their ears clog up, but probably not like mine. It’s painful, it lasts for hours, and it’s like being underwater. Sometimes it’s worse than that.

On this flight, it was worse than that.

We had a terrific one-hour meeting with Irvin and Ken Feld, except that everything they said sounded like it came from Pluto. I sat there grinning and nodding—at what, I had no idea. For all I knew, Jim might have been volunteering me for their motorcycle act: “The Globe of Death.”

And then, suddenly, my inner ears exploded. It was the sound aluminum foil makes when you’re through with it and crush it into a ball. Not fun. Somehow, I kept silent and composed, while the meeting drew to a close. I could hear again.

When Jim and I rose to leave, I said to the younger Feld, “Ken, we have something in common: we graduated from Boston University in the same class. I was a DJ with the student radio station and you dealt with some of my colleagues when you organized concerts on campus.”

Ken nodded, and we left it at that.

A week went by, and then Jim called me into his office; the Felds were on the phone. They agreed to give us complete access to the entire circus cast, and cooperate fully in making the project.

And then Irvin said, “You realize, Jim, that we see lots of people with offers for joint promotions, and we reject almost all of them. We particularly don’t care for how they try to get in with us through some professional or personal relationship. I have to tell you that we were impressed with how your producer Jon waited until the meeting was over to bring up his going to school with Kenny. It was classy, and one of the things that make us confident you’ll do a good job and respect our image.”

Shot over four days in Hartford, Hiram Walker Holiday ‘82 won many awards, including a medal from the New York International Film Festival. More importantly, it was a tremendous success with our client, and led to our getting the production contracts for the next five years, until the company changed hands and they stopped making the videos.

All because I went deaf for an hour.

It also opened the door for me to the whole new area of corporate video production. I went on to write and produce long-form projects for some of the nation’s largest firms.

In 2017, after more than 130 years of bringing enjoyment to “children of all ages,” Ken Feld made the difficult decision to close the Ringling Brothers and Barnum & Bailey Circus. High operating costs and the decline of ticket sales “made the circus an unsustainable business for the company,” he said in a press release.

The finale of our video, to which Ken and his dad contributed so greatly, is an appropriate way to end this KatzTale. Watch for the customized tricks that Gunther taught the elephants. Enjoy … and come back soon.