I was the shyest high school boy in mid-60s New York City. Just ask any of the high school girls. Of course, now they’re all grandmothers.

I don’t think I said a word to anyone for two years. It was a new school for me—a small private school on the Upper West Side of Manhattan named Bentley—and everyone but me seemed totally skilled in the complicated social arts of being a teenager. It wasn’t their fault; I was a late bloomer. No, that’s too optimistic. I was a non-bloomer.

Not that I didn’t have skills of my own. I could sing every rock and pop song, going back decades. But only when I was alone. And I knew comedy. The three independent TV stations ran old comedy movies all the time. The Marx Brothers, Abbott & Costello, Laurel & Hardy, W.C. Fields—I watched ’em all, I knew ’em all, I could do ’em all. But always alone.

And then, as I began my junior year in high school, something wonderful happened:

Soupy Sales (born Milton Supman) made his debut on WNEW-TV, Channel 5, in September 1964. It was on at 5 pm, and that was fine because I was always home by then. After all, I had no after-school activities like being invited anywhere (again, nobody’s fault but my own).

The show was a revelation. Soupy had comedy … music … funny voices … satire. But it wasn’t a kiddie show; it was something more, something higher. The thought process and preparation that made it only seem improvised was clear to me. I got it, even at 15.

And apparently, I wasn’t alone. After a few months, Soupy was the biggest thing in New York, the Beatles of local TV (he wouldn’t be syndicated nationally until later in 1965).

I came into school every morning repeating Soupy’s “Words of Wisdom” from the night before. I recreated entire sketches, doing all the character voices.

And I wrote an assembly play that I starred in; the big finish was me getting a pie in the face. I was getting noticed.

In the early spring of 1965, the junior class (there was one class per grade in this small private school) was getting ready for the traditional Junior-Senior Luncheon­, a grand affair held on a Saturday in May at one of New York’s finer hotels. The highlight was the performance of satirical songs to roast the members of the senior class.

The Soupy Sales Show—the biggest thing on the air—was chosen as the theme. Did I get to play Soupy? Not exactly. In fact, one boy played “Soupy” and another was “Sales.”

But I got what turned out to be the star-making role: all the characters behind the door who you heard but never saw. I jumped into it with both tonsils. The sketches were silly, but I had a blast doing ‘em.

I also performed a bunch of the songs, which clearly shocked the teachers and upperclassmen. When we came back to school the following Monday, I was bombarded with “I didn’t know you did that.”

So I came out of my shell on that day in 1965, thanks to the screwball comedy of a goofy guy singing “Hey, do The Mouse, yeah … Hey, you can do it in your house, yeah.”

It would be fourteen years before I found that out.

When I got the call in March, 1979 offering me a broadcast writer/producer job at SMZ Advertising in Metro Detroit, I had no idea of the connection that Soupy had with the “Z” of SMZ.

Morton Zieve, the firm’s chairman, had joined Simons-Michelson Company in 1961. Prior to that, he was a television producer/director at WXYZ-TV, Channel 7 in Detroit. The shows he worked on were: Lunch with Soupy and the nighttime Soupy Sales Show. Isn’t that incredible?

It was actually in Detroit, in the mid- and late-50s, that the name and the character Soupy Sales were developed. White Fang, Black Tooth, Pookie, Words of Wisdom and all those never-seen guys at the door—they all began in my new town and with my new boss.

Soupy in Detroit: The Formative Years.

Soupy in Detroit: The Formative Years.

Our local Big Boy client (Elias Brothers Big Boy) was planning a promotion for their lineup of desserts, and wanted a TV commercial to spearhead the campaign. Mort Zieve suggested, “Why don’t we bring back Soupy? He’s still tremendously popular here; he sells out every local appearance.”

In fact, Mort underestimated Soupy’s continuing popularity nationwide. The New York show ended in 1966, but from there, Soupy became a fixture on TV game shows like What’s My Line and $25,000 Pyramid. In 1978, he moved back to L.A. and made 90 episodes (in color this time) of The New Soupy Sales Show. According to Soupy in his book, Soupy Sez, the show was made for all ages, but marketed simply as a kid’s show, and so was short lived.

During this time, Soupy got an offer from NBC Radio in New York to go on the air in the slot between superstars Howard Stern and Don Imus. It was an offer he couldn’t and didn’t refuse.

And so, we flew Soupy in from New York, back to Motown where he’d made his first really big splash.

The spot I scripted with SMZ writing partner Eric Head consisted of a single thirty-second shot. Soupy would name the various dessert choices as he takes each plate from camera right and hands it off to the left, punctuated by one of his signature faces or wisecracks. Finally, an announcer (actually voiced by Eric) would ask Soupy what his favorite is. He’d say, “I’ll take Banana Cream Pie” and get it smack in the kisser, followed by a final reaction.

Our plan was to rehearse the hell out of it in the morning. We’d film one for real, then break for lunch and shoot one more in the afternoon. That’s it. We’d get two shots only, because the budget only allowed us to buy two sweaters.

We also had to rehearse the pie throwing, a precise art in itself. Here is some of that actual rehearsal footage, never before seen until you PUSH THE PLAY BUTTON.

We shot the spot, cleaned Soupy up, went to the studio kitchen for lunch, and there we decided that the big finish wasn’t big enough.

Somebody—probably Eric, because he’s quick and clever that way—said, “So why not make it 20,002? You get the pie, say a line, then get another pie…”

“And then say the kicker,” Soupy added.

We spent the rest of lunch hour throwing out line after line, then went back into the studio with fingers crossed—except for the guy who threw the pies.

A few dry runs, and we shot it for real. One take. Perfect. Here’s how it came out:

After handshakes all around, I escorted Soupy to the dressing room. And that’s when I told him about the Junior-Senior Luncheon 20 years earlier, about how I did all the man-at-the-door voices and how no one knew I had it in me until then. And mostly about how he, his show and that day gave me the confidence to go on to become a disc jockey like he did starting out, and meet people by performing in local theatre groups, including, in Promises, Promises, Cathy, the woman I would marry.

Soupy was truly touched. I took out the 1966 Bentley School yearbook I’d brought with me, and showed him a photo. It had the two boys playing Soupy and Sales, and a piece of scenery with a window and a slightly opened door. 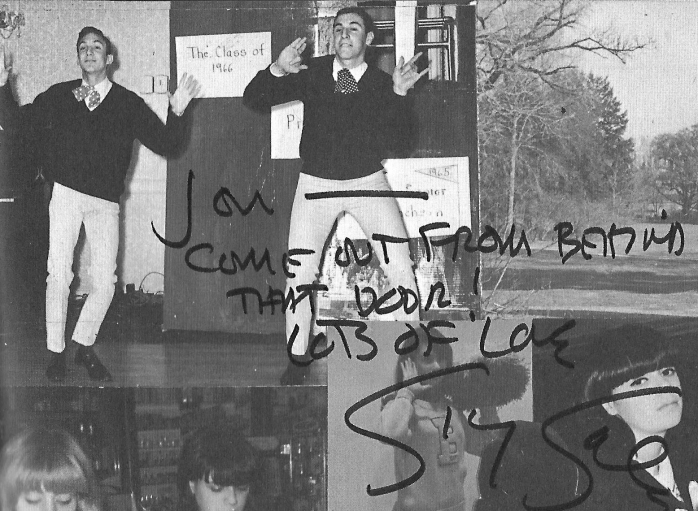 Soupy took the book, took a marker out of his bag and wrote on the photo, “Jon, come out from behind that door! Lots of Love, Soupy Sales.”

I waited twenty years for that. It was worth it.

Before he left, we took publicity stills and the local papers ran the story. 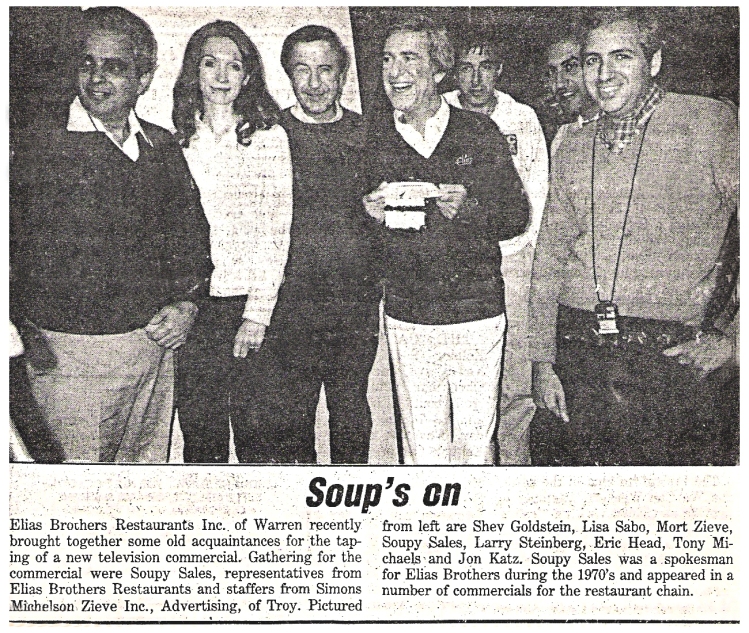 Soupy was kind enough to stay longer so I also got this one:

But I got even more out of it.

Soupy Desserts won a national Telly Award, as one of the best TV commercials in the country.

And after they were dry-cleaned, I got two new sweaters.

8 thoughts on “The Time Soupy Sales Changed My Life. And the Time I Told Him – 20 Years Later”