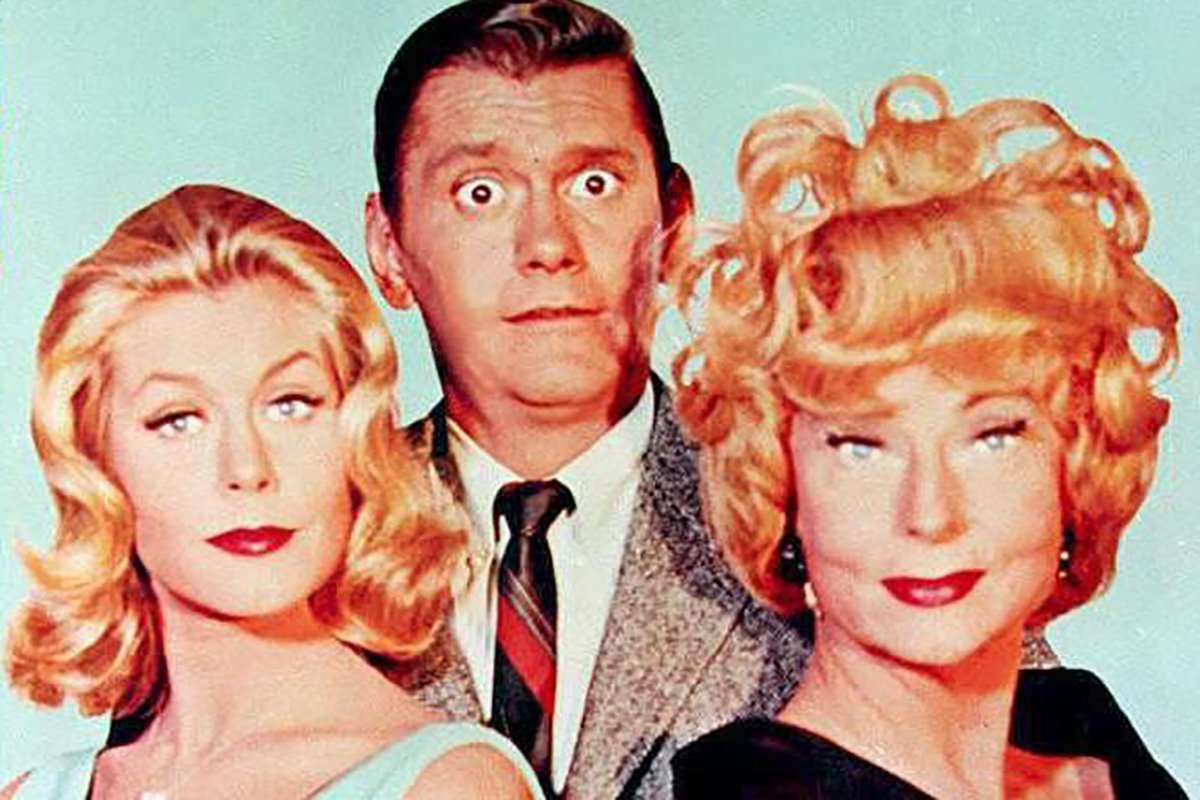 I got into the advertising business to be the next Darrin Stephens.

The befuddled husband of Bewitched would get the screws put to him by boss Larry Tate, only to be bailed out when nose-twitching Samantha conjured up the perfect layout, jingle or slogan.

But, there were also those episodes when mother-in-law Endora would cast a spell over doofus Darrin, making him susceptible to the wiles of every woman who yearned to purr the benefits of the client’s toothpaste.

No female ever twitched her nose for me. A few turned theirs up at me, that’s the closest I got.

But was there any truth to that second scenario? Did I really have a casting couch in my office and endless women waiting to share it? Are you kidding? I was with the same company for ten years before I got my wobbly chair fixed, never mind a couch.

However, there were moments …

Like that time in Chicago when my Art Director Susan Schafer was with me auditioning dancers for the Hiram Walker Holiday ’83 sales film starring football legend Broadway Joe Namath. Dozens of leotarded lovelies were vying for four coveted “girl” spots.

One petite thing in purple (third from left in the photo) shimmied over to where I was sitting, bent over and said, “Excuse me sir, do you have the time?”

I looked at my watch, drooled a few syllables and she slinked off, checking her own watch as Susan rolled her eyes at what was apparently the oldest trick in the dancer’s bag.

So did she get the job? What do you think? And Lee Ann Marie was terrific, a wonderful person as well as performer. In fact, when we needed someone for a scene to be shot in Chicago a few years later, she got the call without an audition … and without asking for the time.

The Namath video was a tremendous hit in closed meetings nationwide with liquor salesmen. Here’s a small taste of why.

But my audition embarrassment was nothing compared to the trouble I got into over one lousy photograph. We were shooting some footage of Natalie, Miss Two Fingers Tequila, for a promotion. I had never met her before.

Let me also say, however, how lucky I became. Cathy, my wife for over 20 years, thinks the photo is a scream. My girlfriend back then—all she did was scream.

Sometimes our brilliant casting led to greater things for the castee:

Betsy Baker was honing her craft as the lead waitress in a series of Big Boy Restaurant commercials, when she was tapped to co-star in a low-budget movie called The Evil Dead, which became a cult classic.

Lauren Campbell played a Big Boy hostess. She went on to marry Detroit Lions great Barry Sanders and was a local TV anchorwoman.

Anita Barone starred in training videos I wrote for the same client. She then relocated to L.A. and was a regular in Carol Burnett’s sitcom series, followed by appearances in Seinfeld, Friends, and The Disney Channel’s Shake it Up.

Cynthia Targosz was a mainstay on our casting lists for many years before moving to L.A. and becoming a fitness and lifestyle expert. She writes, produces and stars in a series of Cyndi’s Secrets™ fitness DVDs, and has sold more than a half-million videos with titles such as “Best Bust.”

Irlene Mandrell was a young model/singer in Nashville when I cast her as a waitress in a commercial we shot there for Shoney’s Big Boy. Almost immediately after it aired, she got a TV series on CBS. Oh yes—her sisters were on it, too.

Celia, Andrew and Maggie Keenan-Bolger dominated the Detroit child performers arena in the 80s and 90s. I directed them all in various projects. After college, they went to New York and are still working actors.

We have to go back to the disco era to meet my favorite female personality: Mona Scott. She was doing local weather in Columbus, Ohio, where I spent five years at the city’s largest ad agency, Byer & Bowman, as senior writer/producer in the Retail Division. Our clients included large department stores in major markets, and we produced 2,000 radio spots and hundreds of TV commercials every year. 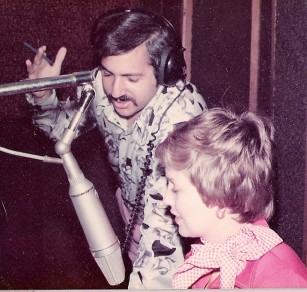 Mona was a delight to work with: always perfect in delivery and tone, always ready to take direction. We’d often make multiple versions of the same spot, “tagging” them with different days, hours or locations. Back then we didn’t pay union wages, and it wasn’t unusual for Mona to record 20 finished spots in a session and make less than what an announcer would earn for a single commercial today.

Mona left for Cleveland TV around the same time I relocated to Detroit (1979), but she returned a few years later. She now resides in Florida, and told Cleveland Magazine, “I thoroughly enjoy my life out of the public eye.”

While I wasn’t quite ever in the public eye, my life in the ad world was often exciting. When you find someone who looks like Julie Miller, and find that she can also do terrific impressions, then you’ve got something to get excited about.

“We’ve Got Excitement” was the theme of our 1985 Holiday Sales Video for Hiram Walker, and the follow-up to our ultra-successful 1984 original musical starring fabulous singer/impressionist Fred Travalena. For the sequel, we partnered Fred with Julie—Atlantic City’s Entertainer of the Year. Here’s a clip of her as Marilyn Monroe and Carol Channing, in a dueling “Hiram Walker is a Girl’s Best Friend.” 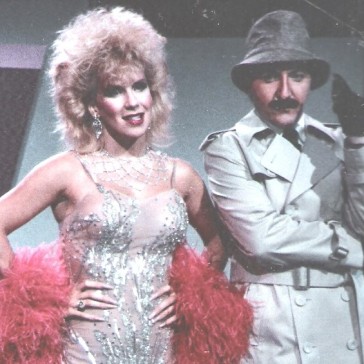 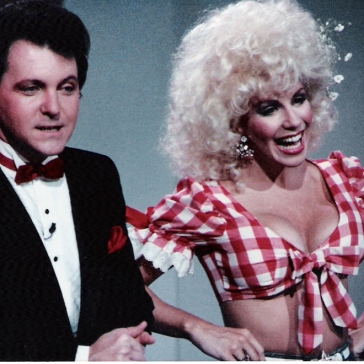 “We’ve Got Excitement” excited contest judges, too. We received a Telly Award, a U.S. Industrial Film Festival Award, and a Silver Medal from the New York International Film and Television Festival.

Sometimes, however, the client sticks you with an idea that you know will be a real stinker. Such was the case with the 1977 Christmas TV spots for Famous-Barr in St. Louis, one of Byer & Bowman’s largest clients. 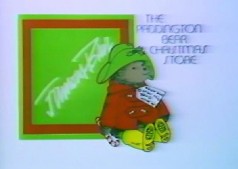 The theme: Paddington Bear. We had no clue how some stuffed animal few people had heard of could carry an upscale department store’s most important campaign of the year.

We decided to shoot the client’s featured clothing items on an antique train located in nearby Lancaster, Ohio. We brought in six fashion models from Chicago. And there we stayed for three days with the stupid bear, and these great-looking models and high-priced fashions (or was it the other way around?).

For me it was a tedious shoot, but I got along fine with all the “talent,” especially a young lady named Candace (Candy) Collins. The green-eyed brunette was quietly professional, more at ease in front of the camera than off. 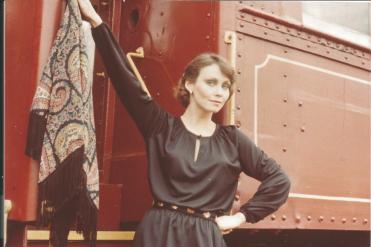 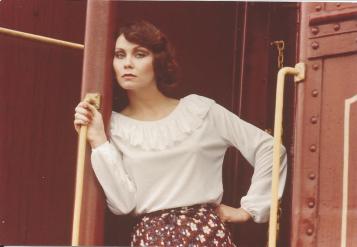 After one long session, we were well behind schedule. Darkness fell as I sat pooped on the train, and was joined by an equally fatigued Candy. Her next turn on camera would not be for some time. We chit-chatted, but then her head fell on my shoulder and she was out for the count. Moments later, so was I.

Fast-forward two years. I was now working at an agency in the Detroit area, when I got a phone message from Columbus. It just said: “Pick up the new Playboy.” 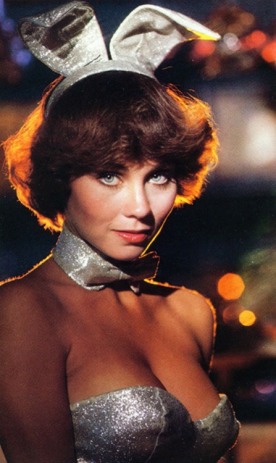 And there she was in the centerfold: Candace Collins, Miss December 1979. The only thing she was modeling this time was a staple or three.

Today, Candace is well known for her successful blog (candidcandace.com), which covers the social scene in Chicago and beyond. She’s also involved in many philanthropic endeavors. 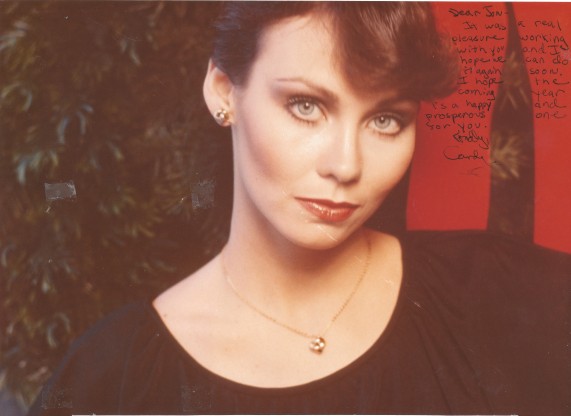 Yessir—I knew there was a reason I got into this business. As it turned out, it sure wasn’t Darrin Stephens.

16 thoughts on “The Time I Slept with Miss December”